The Image as an Archive

To this day, I have never had the privilege of visiting Palestine as a second generation Jordanian. Prior to my early twenties, I have spent much of my upbringing deliberately avoiding the personal confrontation of my hometown’s Zionist occupation. This mode of escapism took a turn when I first enrolled at the Royal College of Art for my postgraduate studies in Architecture, and selected a design unit that was contingent on Portraying Cities, Landscapes, Architecture, and Machines in the Face of Catastrophe (RCA ADS0).

Successively, this past year was dedicated to revisiting my Palestinian origins by closely examining a no-longer-existing neighbourhood in the North of Jaffa called Al-Manshiyya. This long-forgotten jurisdiction offers a layered playing field of territorial tug-of-wars, paramilitary clashes, punitive demolitions, and gentrified overwrites. The Image as an Archive, thus, comprises of a partial forensic reconstruction of Al-Manshiyya. Because this neighbourhood faced a rigorous urban evolution under the Zionist occupation, between 1948 to the present day, it best exemplifies some of the most autocratic practices of spatial and cultural annihilation in Palestine. Further to this, Al-Manshiyya had fostered the most notable lived experiences of my deceased paternal great-grandparents. For these reasons, I have dedicated my architectural re-constructions to its vicinity. 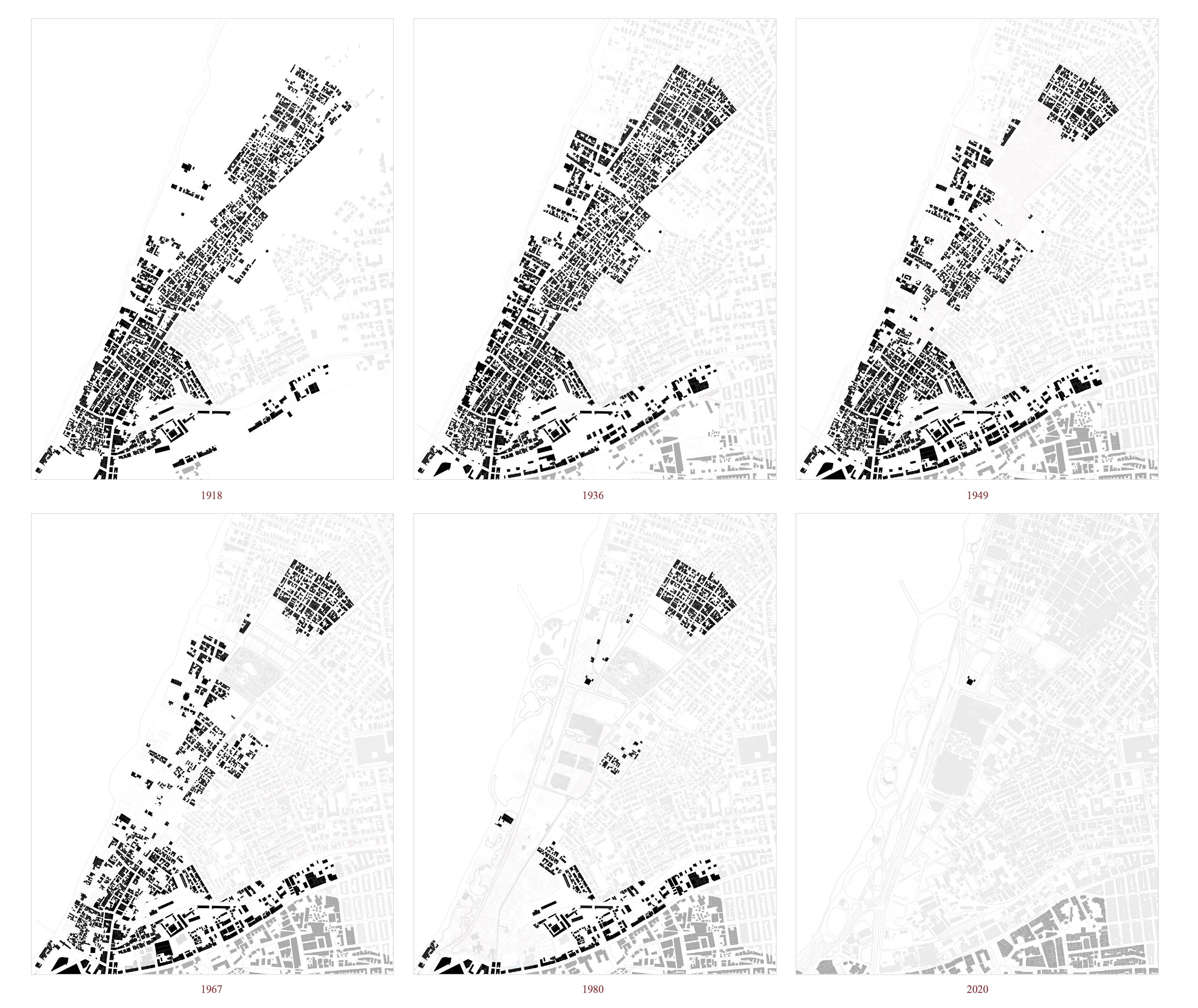 Derivative of the 1948 Palestinian Nakba, the project’s definition of catastrophe stems from the Zionist discursive erasures of Al Manshiyya’s infrastructure, land, and culture. To confront these erasures, this investigative practice understands the archive as a mechanism to render visible what has been purposely made invisible under the Zionist occupation. In particular, I have compiled this wide-ranging archive using a wealth of fragmented research, ranging from scarce photographs to personal testimonies collected from interviews and schematic drawings.

Taking precedence from Ines Weizman’s Documentary Architecture practice and its fastidious digital reporting techniques, this project aims to problematise the erasure of Palestinian territory from the regional to the material scale. Cross referencing this diverse material helped me digitally reconstruct some of the most significant architectural elements for three critical typologies: the market, mansion by the beach, and generic Palestinian residence.

Moreover, to reconstruct a generic vernacular dwelling in Al-Manshiyya, I have conducted a long-distance interview with one of its former residents: Dr. Ahmad Sharkas. Born less than ten years prior to the State of Israel’s establishment in 1948, Ahmad Sharkas contributed a meticulous account of experiences in his childhood home. Through our sporadic dialogues, I was able to gather extensive knowledge regarding the spatial, architectural, and material principles of his vernacular Arabo-Islamic dwelling. 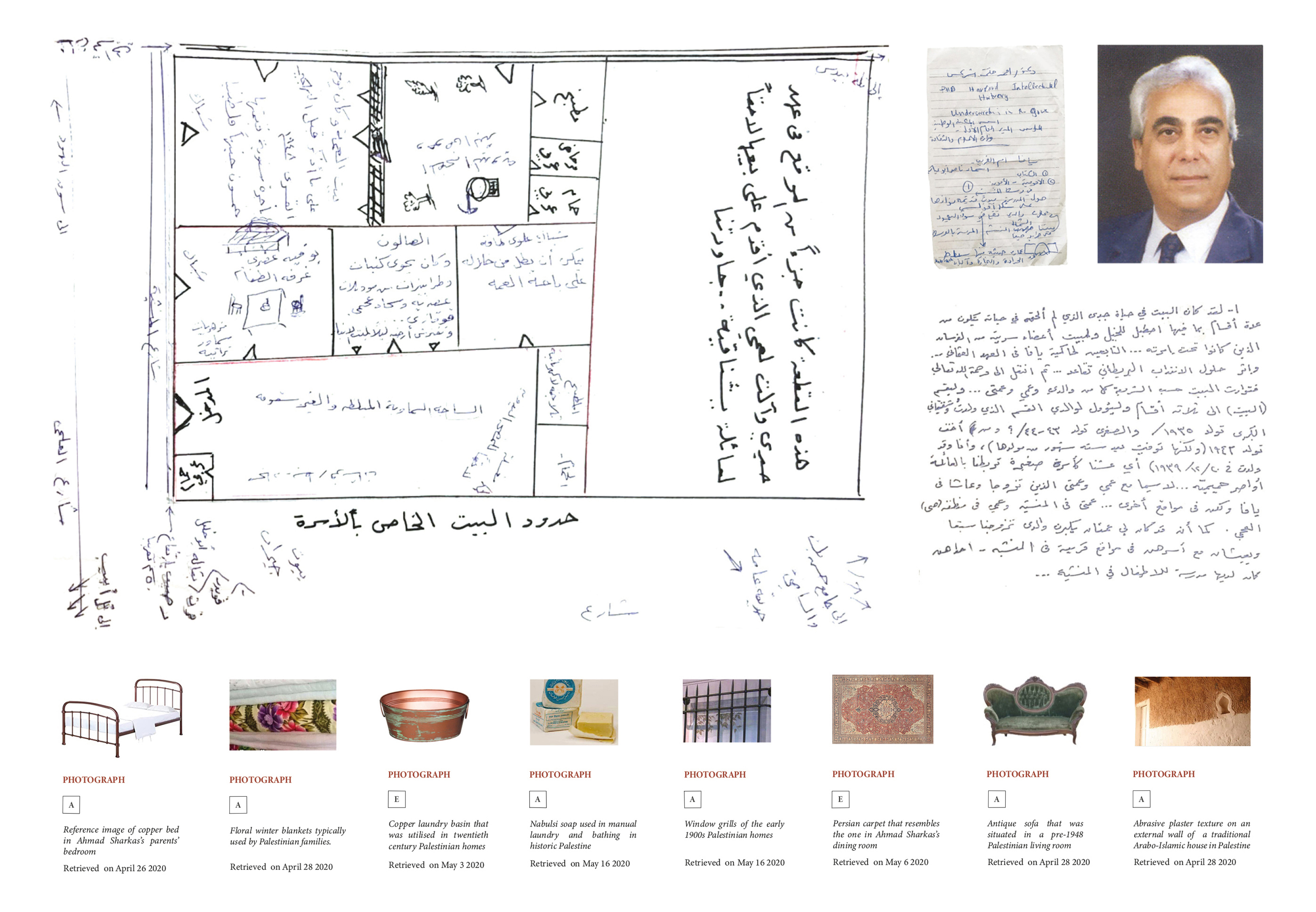 Because his residence was demolished alongside the majority of Al-Manshiyya between 1948 and 1980, it was crucial to restore its unique material culture and most intimate domestic elements. Subsequently, a digital model was constructed based on numerous conversations and a schematic drawing that was provided by the interviewee.

Central to the project was the re-enactment of Al-Manshiyya’s foremost domestic and commercial attributes. Combined with initial material studies of the neighbourhood's vernacular architecture, these speculative 'frames' seek to revive the essence of these local typologies.

The Mansion by the Beach

Grounded in street level interactions, the following representations not only foster quintessential Arabo-Islamic design prototypes like window grills and traditional shopfronts, but also domestic furniture that was characteristic of pre-Nakba Palestine. They chart an alternative territory, by framing the most up-close and personal rudiments of a once-thriving Palestinian neighbourhood.

Whether it is to underscore the intricate screening system of a traditional mashrabiyya window, or to recreate a sequence of domestic rituals, the production of imageries using the Lumion 10 rendering engine serves to revitalise mundane Arabo-Islamic routines that were commonplace in Al-Manshiyya. Ultimately, the following frames have offered a novel methodology that enables their audience to experience the past through contemporary modes of visualisation.

The exhibition is a reACT project and supported by the Art Council England and HUB Collective.